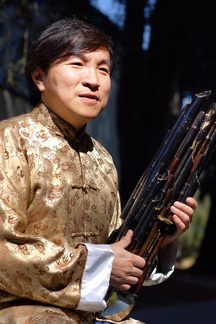 A member of the Chinese Musicians’ Association, China Nationalities Orchestra Society, and China National Wind Instrument Society, Mr. Guo Wan Peng studied the sheng, guan and suona from the famous wind instrument maker and performer Wu Zhongfu during his childhood. He attended Beijing Youth Palace Chinese Orchestra and performed solos. In the end of 1977, Guo joined China’s National Chinese Orchestra. Since then, he recorded many pieces of music for broadcasting stations, recording companies, movies and TV shows. Along with the Orchestra, he visited France, German, Australia, Denmark, and the US, including over hundred solo performances. As a member of Asian ORchestra whose musicians were from China, Japan, and Korea, he performed in many cities in these three countries.

Mr. Guo immigrated to the United States in 2001, and has been a Sheng instructor in FYCO. He was, later on, a sheng soloist with the Melody of China in San Francisco, and also a conductor in Great Wall Youth Orchestra in Oakland. In 2005, Yan Huichang, the conductor of Hong Kong Chinese Orchestra, praised Guo as “the most excellent alto sheng player in the world.”