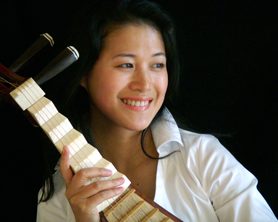 Award-winning and classically trained pipa virtuoso, Shenshen Zhang, born in southeast city Wenzhou, China, has been recognized in Asia and America for her exquisite tonal qualities and delicate lyric interpretations. She is best known for her remarkably elegant and profound interpretations in performing traditional Chinese pipa repertoires. Shenshen has also participated in landmark premieres of works and recordings by the modern generation of world composers like Tan Dun and Chen Yi, among others. Shenshen held B.A from Central Conservatory of Music and M.A from Xiamen University in China. Since making her home in the San Francisco Bay Area in 2006, Shenshen has been honored to perform with many exceptional international artists, including Los Angeles Chamber Orchestra, San Francisco Symphony, Symphony San Jose, Houston Grand Opera, Alonzo King Lines Ballet. In 2019, she released her solo album, SERENITY, a masterpieces collection of tradition Pipa works. She also has been privileged to record the Pipa sound samples for Apple’s GarageBand App released in 2016. Shenshen has merged her wide-ranging performance career, her expressive musical abilities to preserve the heritage of Chinese culture, while she is also exploring the musical legacies of other world cultures through her original composition and improvisation to tell the stories with her Pipa.