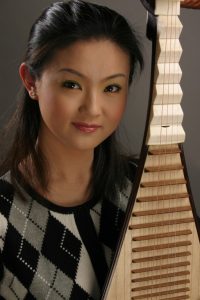 Profile
She began her musical study at age of five, initiated by her mother, who was also a Pipa professional. Later she was accepted by Masters Fendi Wang, Dehai Liu, Yuzhong Kuang in Pipa and professor Jiliang Lin in åRuanπ. She has been playing in public both as a soloist and in orchestra since age 8. She loves music and expects to inject new ingredients into rich-cultured Chinese Music.