David Cohen is a multi – instrumentalist who performs on the Classical & Flamenco Guitar, Turkish Oud and Pipa. David resides in Philadelphia and performs regularly along the Northeast corridor and teaches out of his Ocean Grove New Jersey studio. David also chairs the Ocean Grove benefit concert that raises funds for the Monmouth/Ocean County Food Bank of New Jersey.

David’s studies the Pipa with Master Sun Li at the New York based Music From China. He has performed on the Pipa for the University of Pennsylvania Museum of Archeology, Vote! Philadelphia Music Festival and at the Paramount Theater in Asbury Park, New Jersey. David also writes articles for the Philadelphia based magazine, Philadelphia Music Makers.

David currently is working on a cd of traditional and original pieces for both the Classical & Flamenco Guitar, Oud and Pipa. The cd will also contain original works for the 12-String Guitar and Turkish Baglama. 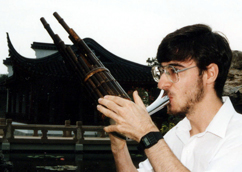 David Badagnani specializes in new and improvised music for English horn and oboe, as well as a variety of wind, string, and percussion instruments from China, Vietnam, and Thailand (including the Chinese sheng, suona, guan, xun, sanxian, yueqin, and yehu; the Vietnamese kèn; and the Thai jakhe). He is a founding member of the intercultural avant-garde group Pointless Orchestra, collaborating frequently with dancers, painters, poets, and filmmakers in multimedia performance events. David also performs regularly with the Phong Nguyen Vietnamese Ensemble, as well as with Chinese, Thai, African, Irish, American old-time, and Australian traditional ensembles. In 1998 he toured Thailand with! Kent State University’s Thai Ensemble (the first foreign ensemble to perform Thai classical music there), and in 2003 was invited by Yo-Yo Ma’s Silk Road Project to play kèn in the premiere of a new cross-cultural work by Vietnamese composer Tran Thi Kim Ngoc.

David holds degrees from Florida State University and Kent State University (in Kent, Ohio), where he is currently a faculty member and doctoral candidate in ethnomusicology, and where his research focuses on global rap music and intercultural musical collaboration. His doctoral research involves the cataloging and archiving of the works of the Egyptian-born American composer Halim El-Dabh (with whom he performed in Alexandria, Egypt in March 2002 for the inauguration of the newly reconstructed Library of Alexandria). He has performed with Jin Hi Kim, Joseph Celli, Richard Teitelbaum, George Lewis, Wadada Leo Smith, Phong Nguyen, and Halim El-Dabh, and has recorded for the Without Fear, Manifold, Pointless Music, Yucca Tree, Uphrania, Scattershot, and SRCA labels.

Valerie Samson is a composer, ethnomusicologist, and performer. She majored in music at Boston University, then studied composition, theory, history, and ethnomusicology at the University of California, Berkeley and Los Angeles. Her Ph.D dissertation includes a monograph on the modern chamber concerto as genre. She has composed a variety of works for chamber ensembles in a style that reflects her contrapuntal training with Hugo Norden and studies with Andrew Imbrie.

In the 1970’s Valerie Samson became involved with the Chinese-American community in San Francisco. She played the zhonghu (2-stringed fiddle) with the Flowing Spring Ensemble lead by Betty Wong and the Chinese Instrumental Music Association under Lawrence Lui. Currently she plays Cantonese opera at various clubs, including Hoy Fung and Nam Chung. She performed the hichiriki (shawm) in Suenobu Togi’s Gagaku ensemble at U.C.L.A. and has soloed on the sheng (bamboo mouth organ). She has taught several courses in Chinese music at U.C.L.A.

Valerie Samson’s ethnomusicology research focuses on the changing role of traditional huqin instruments in contemporary performance practice. Her video documentary Sheng: Bamboo Mouth Organs” won the John Lennon Award. Her documentation of music as protest strategy at Tiananmen Square, 1989, is also well known. She is a member of the Society for Ethnomusicology, the International Alliance for Women in Music, the Association for Chinese Music Research, the Society for Asian Music, and Chinoperl. Her recent writings appear in ACMR Reports.

Michael Santoro is a musician, stage director, producer, and educator of world music. For over a decade, he has dedicated himself to introducing ethnic music and social consciousness through innovative staged presentations.

Since 1996, Michael has been the Artistic Director of the Jumping Buddha Ensemble, performing for Northern California audiences and touring nationally. As musician, Michael Santoro specializes in performance of the dong xiao (vertical bamboo flute). He also performs other Chinese traditional wind instruments, including the bawu (transverse flute), and xun (globular ocarina). Michael studied Cantonese music in Guangzhou, the eight-hole xiao in Beijing, and has researched Buddhist music in many temples throughout Taiwan. Performance highlights include the Knitting Factory (NY), Bethlehem Musik Fest (PA), & Goldman Environmetal Prize (SF War Memorial Opera House). He also performs with the Cantonese Music Ensemble and opera clubs throughout the year in various concerts and community events. For the past several years Michael has been commissioned to develop original works incorporating Chinese music, dance, and innovative staging presentations. In 2001, the Goldman Envirnomental Prize commissioned a new work Yang Guan San Die, or Parting At Yang Guan, to be premiered at the San Francisco War Memorial Opera House. In 2002, he was commissioned as music director for the staged collaboration Dynamic Spirit, incorporating Chinese Wushu, an original score performed by a traditional orchestra, traditional choreography, and Western staging.

In 1995, Michael founded and is currently Executive Director of Door Dog Music Productions, a Bay Area non-profit organization which introduces various world musical traditions. In 2000, he co-founded the San Francisco World Music Festival, bringing master musicians from various parts of the Middle East, Central Asia, & the Bay Area. Additionally, in 2003, he was on the Event Committee of the Asian Art Museum and was Program Director for the Lily Cai Chinese Dance Company from 1997-2001.

Matt Springer (erhu/violin/percussion/piano), who is on the Cardiology faculty of UC San Francisco as a research professor, moved to erhu from violin in 1994 with the help of professional erhuist Chen Jiebing. He plays erhu and zhonghu in Melody of China’s Golden Gate Ensemble in San Francisco and has performed occasionally with MOC’s main performing group, and played in the South Bay Chinese Orchestra in the San Jose area for many years. During the 1990s, Matt gave several multi-instrumental recitals in the Stanford Music Department, and appeared as piano soloist and as mallet percussion soloist with the Stanford Symphony Orchestra. In 1995, the Stanford Symphony Orchestra went on a concert tour of China, during which he had the opportunity to perform erhu selections in a formal setting in Jiangmen’s Wuyi University and in an informal setting at Beijing’s Chinese Conservatory of Music. Matt currently plays violin and percussion in the Peninsula Symphony Orchestra, based on the San Francisco Peninsula. In the past, he has belonged to the Stanford Symphony Orchestra, the Stanford Percussion Ensemble, the Redwood Symphony Orchestra, the UC Berkeley Symphony Orchestra, and the Santa Clara Vanguard Drum & Bugle Corps; and performed numerous times as a violinist with TheatreWorks in Palo Alto. He is a published music arranger, whose publications include his Jewish Folksong Suite for String Quartet (1996) and his mallet percussion arrangements of Khachaturian’s Gayane Ballet Suite (1994) and music of Edvard Grieg (1996). He has also arranged Chinese music for western instruments, and western music for Chinese instruments. His current goal is to learn enough Mandarin to understand his fellow orchestra members during rehearsal. As a resource for other western musicians learning Chinese music, he has prepared an explanation of Chinese music notation and posted it at http://homepage.mac.com/matthewlspringer/Chinese_notation_system.html